Evoluent Vertical Mouse 4, reviewed by me 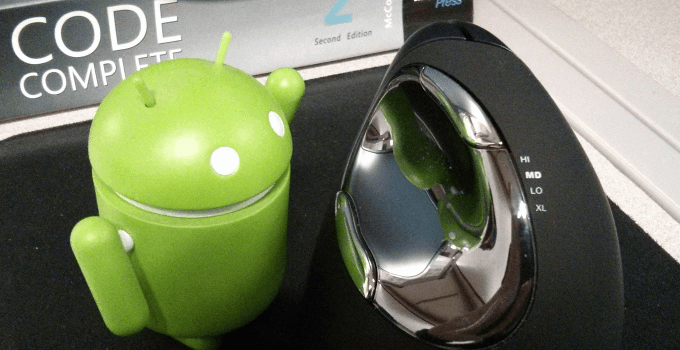 When my wife surprised me with an Evoluent Vertical Mouse 4 for our wedding anniversary, the look on my face was reminiscent of a barn cat stumbling across a clandestine mice suffrage rally - Tasty!

Like most of us, I use the keyboard and mouse enough that I have to think about the implications to my wrists. I try to avoid leaving the cozy confines of the keyboard whenever possible, but unfortunately in certain cough environments it just isn’t possible pull the nano receiver completely. This mouse is designed to help alleviate some of those concerns by forcing you to adopt a handshake position with your arm, which is touted to be more ergonomic.

So after using the fancy fellow 40-60 hours a week for the past 8+ months or so, what’s the verdict?

Let’s start with some live-action shots of the Evoluent VM4RW making first contact with a curious android:

[Rear left] If you’re right-handed, you’ll spend most of your time viewing the mouse from this angle. (Unless you’re a handsome android - then you’ll just stare at yourself in the reflective finish of the thumb rest until your batteries drain away.)

[Rear right] I forgot to capture it in the picture, but the Evoluent logo lights up blue when the mouse awakens from its slumber. Nice touch.

[Front] You shouldn’t expect to see this angle on a daily basis unless the mouse is trying to attack you.

As you can see in the pictures, it’s a really good-looking mouse, pretty even. The vertical form factor has enough novelty to give it a high “fun factor” too. It draws a fair number of comments from coworkers, which could go on either your “pros” or your “cons” list, depending on how you feel about your coworkers. ;)

There are three primary buttons on the right side which correspond to the LMR buttons on a traditional mouse, a clickable scroll wheel, two auxiliary buttons flanking the thumb rest, and even a rocker to increase or decrease pointer speed using the mouse alone. If you like buttons, you’ll be in geek heaven.

You’ll notice the “skirt” which flows down from the bottom right-hand edge. This is a design feature introduced to prevent callouses or even sores from forming on the right side or your little finger. It works.

When the mouse powers up from sleep the Evoluent logo lights up blue for several seconds, and another indicator lights up green depending on the pointer speed you dial in with the built-in speed control. The illuminated logo wastes battery and is totally superfluous, but it’s also totally awesome! I love it.

The shiny thumb rest adds a lot to the visual charm, but it does pick up fingerprints. You’ll want to keep a microfiber cloth at the ready.

So far, quality has been superb. The clicks feel solid. There are no annoying squeaks or creaks and the plastic feels sturdy; you can give it a good squeeze without it groaning in pain. After all, it is the original “handshake” mouse right? Who likes a wet fish handshake?

The only trouble I had at one point was with the scroll wheel. Scrolling was jerky and jumped up and down sometimes. After contacting Support, it turns out the scroll wheel sensor was bad. The mouse was still under warranty, and they replaced it at no additional cost.

At its core, the VM4R is a solid mouse. It’s smooth, responsive, I’ve never experienced pointer drift. Battery life has been excellent. I’ve not had to replace the batteries in over 8 months of heavy use.

The optical sensor doesn’t emit an optic nerve-searing red light, which is pleasant for everyday use - but keep that it mind in case you reach for it in order to fend off a flying office ninja.

I’ve only ever used it with a mouse pad, so I can’t speak for using it on odd surfaces, like glass, polished granite, or the moon.

The scroll wheel is very smooth and the accelerated scrolling feature is a gem. You have to turn it on in the settings, but I highly recommend it, especially if you have a lot of screen real estate.

Speaking of the settings, the buttons are highly configurable, as you can see in the screen shot.

You’ll notice that I have button #2 set up as a Double Click - a feature I use all the time. Just imagine the thousands of clicks I’ve spared my forearm since configuring that setting alone! It’s even possible to launch a script or a program with a given click combination. AutoHotkey users might find that handy. (In order to fire an AHK script, you’ll have to compile it as an .exe and configure the mouse manager to use that.)

There’s a really cute (cute? :)) feature which, if enabled, reminds you every X minutes to “Take a break a stretch your body.” It helps us avoid the gamut of corporal kryptonite afflicted on us by our sedentary office habitats. My only gripe is that you can’t configure the message which pops up; I’d love to be able to load up an XML file with quotes of my choosing and have the mouse manager pull randomly from those…

As I mentioned above, I had to deal with Support over the issue with the scroll wheel. We dealt exclusively over email, and their staff was friendly and responsive. The only downside was that I had to pay for shipping the problematic unit to them. But they confirmed that the scroll wheel was bad and shipped me a replacement at no additional cost. I only had to use a substitute mouse for about a week.

It’s a great mouse. Sometimes I forget how much I like it until I have to use another mouse. I believe that a lot of that has to do with the software features, first among them being the accelerated scrolling feature, which comes in real handy on a 4K monitor . My second personal favorite has been using the middle button as a double-click. I use that all the time. Think about how much repetitive stress that feature alone has saved me.

Years from now after this little mouse is grizzled and gray, unless some other upstart woos my fingers away, I’ll probably buy another Evoluent (or maybe if I’m good my wife will reprise her role as bringer-of-awesome-gifts! wink). Yessir, she had me with a handshake.