My 2¹² cents: Yup, 4K Really is for Programmers 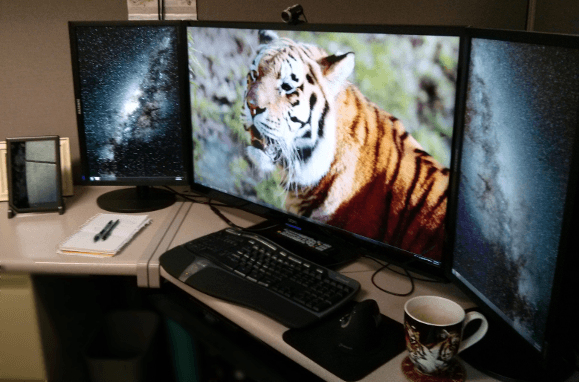 You’ve no doubt heard the hype surrounding the use of 4K (Ultra HD) in software development. I’ve been using the 4K 39” Seiki SE39UY04 television as a computer monitor for a couple of weeks now and wanted to share my story. In case you’re trying to decide whether or not to pull the trigger, this article is for you.

Here’s the really crazy part: As of the time of this writing you can get it on Amazon and other sites for around $339. You won’t find 4K anywhere else for less than 1-2 grand!

Grrrr! And now for a nice angle shot:

Pretty amazing, opulent, decadent even. Whether it’s my imagination or not, having all of that space on which to arrange my work makes me feel a smidgen more productive. It’s a sweet feeling when you’re typing in a command and you say, “Okay, what was that parameter again? Let me Alt+tab over to my brow.. Oh wait! I don’t have to! It’s already open!”

Text is a little smaller that I was used to but I found that it was so crisp that my eyestrain was actually reduced. From what I read I was a little worried about the 30Hz refresh rate but it hasn’t been a problem at all. I only notice it when scrolling through a lot of code; it seems a little blurry. I was worried about the glossy screen too but it hasn’t bothered me. (I can even wave to the guy with the awesome monitor setup!) Some also complained about mouse lag but I haven’t noticed anything. That being said I use the keyboard much more than the mouse and I’m not a gamer.

If I had the money and could choose between the 39” and 50” models, I would still choose the 39”. I think the increased size of the pixels on the 50” model would reduce the sharpness of text and images.

Of course you need a fairly powerful video card to drive 8 million moving pixels (or the nearly 12 million I’m sporting in the screenshot), more so if you plan on gaming or watching videos. I’m doing neither of those things, as I’m not a gamer or a movie critic. As has been stated succinctly elsewhere, 4K is for programmers. My computer doesn’t even have a dedicated graphics card and it does just fine.

Amazon has it for $339 as of the time of this writing. It’s also available at Wal-Mart and Newegg and TigerDirect at similar prices.

If you don’t have HDMI on your computer, you’ll have to do your homework. Neither VGA nor DVI can handle that kind of throughput. DisplayPort will though. I was able to get it working via DisplayPort with this active adapter  (or this one  if you have Mini DisplayPort).

The first thing you’ll want to do is update the firmware:

Then you’ll need to coax it into behaving less like a TV and more like a monitor. You can find the following settings via the regular menu or via the secret service menu you used to update the firmware (Pressing 0000 at the menu)

Of those settings, the “Sharpness” setting is the most important, or stuff will look really, really lousy.

After that plug the TV into your computer with the provided HDMI cable.  If all goes well, a glorious Ultra HD picture will come bursting out. Then, just make sure that your graphics card is indeed putting out 3840x2160 at 30Hz. At first my computer wanted to run it at 29Hz. When it’s that low already, you don’t want to be cheated even 1Hz. That hurts, man.

Some reviewers tell you to bump up your DPI. I didn’t. I can see the text just fine and want every inch of luxurious real estate I can get my mouse on. In some instances, text is almost too small, but not quite. I usually zoom in a little in a browser or word processing window.

One thing you’ll notice is that your window manager will need a little help. There’s just so much space it’s nice to have a tool to quickly move around and organize windows. DisplayFusion  has helped in that area. It even allows you to have a taskbar on each monitor. (UPDATE: I found DisplayFusion to be a bit heavy-handed, so I switched to Divvy )

As I mentioned earlier, when the TV goes to sleep, the computer thinks it’s disconnected and you lose all of the placement and sizing of your windows. That’s where AutoHotKey comes to the rescue  if you’re using Windows. Add a hotkey that runs  winsave.ahk when you press Winkey+L to lock the screen. Add another hotkey of your choice that runs winrestore.ahk. When you come back to your machine and all of the windows are askew, press that key combination and it should restore your windows to their rightful place and position.

It’s amazing. If you’re a programmer, get it! You won’t regret it. If you aren’t a programmer or do graphics/print work, or just don’t want to have to fiddle with stuff, don’t get it.