If Programming Languages Were Running Shoes 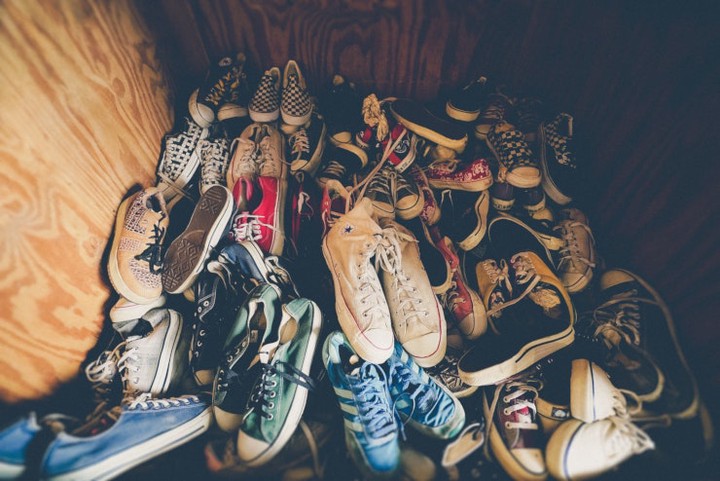 Photo by Jakob Owens on Unsplash

What if your favorite programming language was actually moonlighting as a running shoe? What would it feel like to run in it? Say no more, because here they are, and in no particular order. It’s just a heap of running shoes.

Programming in C is like running barefoot. It’s just you and the hard asphalt, the bare metal. Or maybe the grass, if you’re fortunate. In fact, you may need some grass, after your first buffer overrun pierces your foot and leads to that humiliating international incident.

Perhaps you objected to C as the bare asphalt barefoot running shoe, expecting assembly to fill that, erm, role. But assembly language isn’t a shoe at all. Ambulating in assembly is like participating in a marathon, but instead of running, you’re doing the worm the whole dang time, naked.

C++ is like running with two milk jugs on your feet. You shuffle along loudly, occasionally succumbing to the pull of gravity and other obstacles, wiping out spectacularly in front of that girl you like, even spending a few weeks as a meme. But hey, at least you’ve got two objects on your feet.

Perl is an ancient Roman combat sandal. A few years back it was all the rage. Now the only thing left is the rage — when you try to understand what in the world that Perl script was supposed to be doing.

Rust is a magical pair of gray track spikes with soles that feel great and never wear out. You wish they would, so you could get a new color.

Go is Vibram FiveFingers. Everyone has a pair. In their closet, accumulating… Rust.

Java is the greatest running shoe ever invented. It’s every innovation and fad in footwear ever, all wrapped in one shoe. Motion control, plush cushioning — minimalism? wuut!. Somehow they managed to pull it off. However, it must be worn on a treadmill and accompanied at all times by at least four pretentious graduate students, one for each end of the shoelaces.

JavaScript is the shoe everyone is wearing, even when they’re not running. Some people even wear ’em to bed and in the shower. They’ve gone mainstream athleisure. They’re the first “10X” shoe: A single step in a JavaScript shoe spawns 10 social media water cooler conversations.

C# is a Hoka One One. It’s big, it’s cushy, and it doesn’t care if you heel strike, or even if you just stand there looking pretty. You bring the cash, they’ll bring the infra — I mean shoe — and get you wheezing past the finish line.

Ruby is the Nike Vaporfly 4%. It’s controversial. Some claim it unlocks greater speed and efficiency. Is it true? Well, I guess you’ll have to test it yourself.

You might’ve thought Object C was the Vaporfly because you only bring it out on special occasions. But no, Objective C is an expensive pair of golfing shoes.

Smalltalk is the first pair of Nike’s, but like, before they were Nike’s, when they were Blue Ribbon Sports, hot off the waffle irons. Old timers reminisce.

Elm is a custom-built concept shoe for elite runners only, complete with a fancy coach that critiques your form and technique.

It’s the self-lacing Back to the Future shoe. You’d love to get even one shoe for the nostalgia, but you just can’t get it. Like literally, you just. don’t. get it.

Cobol is a pair of oxfords. Which nobody runs in, at least not anymore… Legend has it that Tom Cruise rocked a few back in the 80s.

Python is a pair of Air Jordans. They may not strictly be running shoes, but all that enforced whitespace keeps you from spraining your ankle.

Powershell is a Merrell trail running shoe, for when you need to get out in the weeds and get stuff done. Or just volunteer at the aid stations.

Bash is a huarache. People have worn them for generations. Some ultrarunners still wear them.

Bash, for when you’re out of options. Or you just want to bring the pain.