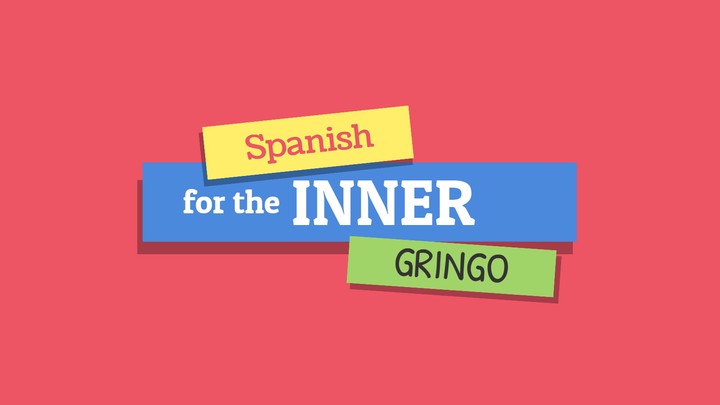 I recently launched a new learning channel, Spanish for the Inner Gringo ! It aims to help you polish up (squeak) your Spanish accent and grammar so that you sound more like a native, and less like a Hawaiian-shirt-wearing, camera-laden tourist.

The videos are short (only two-minutes!) and I will be releasing one video every few weeks. The AV is sub-par, so you’re bound to get some laughs too. Subscribe to the channel and sign up for updates so you won’t miss a single video.

Motivation behind Spanish for the Inner Gringo

I’m working on producing some instructional tech videos for Udemy and Pluralsight. Spanish for the Inner Gringo was conceived primarily as an experimental public service channel to help me work out the kinks in my A/V setup and process.

That said, if you’re a knowledge worker, people are paying you to be… (wait for it) knowledgeable. People judge your intelligence based on your ability to communicate and clearly express your ideas. You could be a rocket scientist of the first order, but when no one understands you, they tend to write you off.

Effective communication is hard enough in our native tongue; when we jump ship to another language like Spanish, that difficulty increases by orders of magnitude. Even after reaching a level of fluency, we often struggle with minor to major mistakes in our pronunciation, word choice, grammar, and speech patterns. Spanish for the Inner Gringo helps intermediate to fluent Spanish speakers correct the mistakes they didn’t know they were making.

As languages go, Spanish is supposed to be one of the “easier” ones for native English speakers to pick up. It has a similar alphabet, some similar words, and the grammar is fairly consistent. But that’s where the “ease” ends.

All languages are really hard to learn

Early on I realized that once you’ve mastered the essential mechanics of a language, they’re all incredibly hard. Why?

For example, achieving a native equivalent accent is almost impossible, as we’re “hardwired” from infancy with the limited set of phonemes provided by our native tongue. It’s possible to learn new sounds and their combinations, but it’s an uphill battle requiring countless hours of focused practice.

If grammar is like the syntax of a programming language, speech patterns are like a super complex and capricious style guide.

I’ve had a lot of help learning Spanish. Now I’m paying it forward.

Me and Spanish go way back. As I’ve struggled with the intricacies of Spanish over the years, many people have helped me along the way. I’ve picked up some tips and tricks that have helped me communicate a little better with the natives. It’s my hope that this new learning channel will provide you with a shortcut in your path to a more polished Spanish.

Why is your AV so bad?

I’m no perfectionist, but the quality of these videos hasn’t crossed the threshold of acceptability. I lack quality audio/video equipment. You’ll notice that the lighting in particular is a little sketchy. I hope to pick up a cheap greenscreen/lighting kit that will propel the video quality across that subjective quality finish line. Additionally, I need to spend some time tweaking my sound levels, or experiment with adding a compressor.

I have a Spanish pronunciation pet peeve. Can you make a video on it?

Maybe. Leave a comment below and I’ll consider it. I may drop support for comments from this blog when I move from WordPress to a static site, so if you don’t see a way to comment down there, send me a tweet @tygertec .