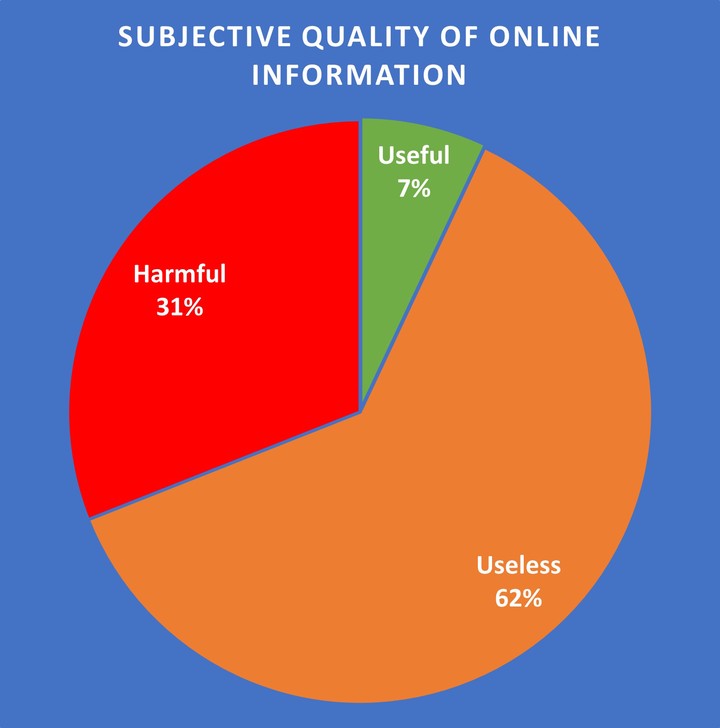 Useless pie graph I made up

It was 1983, and the Internet was an infant with fresh poo in its diaper, cooing for attention. Now an aging millennial, the diaper is long gone. The cries for attention, however, have become the raucous worldwide cacophony of the digital age.

And the poo? It’s everywhere, as you can see in the above pie graph I just made up.

The founding fathers of the Internet hoped to usher in a new Information Age, facilitate the sharing of Big Ideas and the free flow of information across cultural, linguistic, and national boundaries… Yup, totally nailed it.👍 If only that “free flow” didn’t smell like the River Thames in 1858.

Digging for Answers in 1983

Back in 1983, when you had a Serious Question, finding a serious answer required some serious work. So serious, and so hard, that most people opted to sit home and drink a beer instead.

But when you wanted that answer bad enough, you made a pilgrimage to the local library, a Real Life building of supreme order and pin-drop silence ruled by a bespectacled cardigan known as the “librarian”.

The well-read librarian was, in essence, your search engine, your Lady Google. You asked a question, she returned search results in the form of books. Depending on the question, you might have to sift through a few hundred to tens of thousands of pages to get at the answer.

Eventually, cathartically, the answer might leap from the page, travel through your optic nerve, and integrate neatly into your cerebral cortex. Ahhhh…

But consider the other side of the page. How did the answers come to imprint themselves onto those pages in the first place?

It was 1983, and you had »The Answer!« But how would you publish it to the inquiring masses?

You could type up a manuscript, run off a few copies at Kinkos, then pass it around to friends and family for feedback and grassroots broadcasting. This was not scalable or effective. Your Answer sat in the begrudgingly polite darkness of your friends’ “BOSISONTTA” — Box of Stuff I’m Socially Obligated Not to Throw Away.

No, to produce millions of real books, you needed a printing press, a bindery, and a bushel of cash — yup, a publisher.

Most often, »The Answer!« would not be published for two basic reasons:

When The Answer turned out to be just another Dumb Idea (whomp, whoomp…), this was not good for business. So the publisher-as-gatekeeper approach kinda sorta helped maintain the quality and accuracy of books. Let’s see an example.

It was still 1983, springtime, when Aletheia stayed up way too late smoking way too much of an illicit-for-its-time substance. The first rays of sunshine glided deftly between the troughs in the mountain range visible in her backyard, snuck through her kitchen window, and painstakingly scooted around the bags under her eyes. She blinked. The songbirds sang.

She poured herself a cup of hot Folgers, but without the catchy ditty — The best part of waking up…🎵 wouldn’t air until 1984. She had to settle for a cigarette and a few packets of Sweet’N Low to augment her coffee ritual.

Maybe it was the coffee aroma, maybe it was the gentle rip of the sugar substitute packet — we’ll never know for sure — but like a knock on the door, she was visited by… The Answer.

Coffee sloshed over the side of the mug as she pounded down the creaky basement steps. The overhead fluorescent tubes resentfully buzzed to life with a click of the dangling chain. Eyes wide, knuckles cracked, it began with a single strong tap on the typewriter.

Month after month, she toiled, focused, typewriter tapping and dinging, a stack of pages growing alongside it in stop-motion like a bean plant reaching through the soil in search of light.

Then late one Friday afternoon, the weathered sky blue front door groans grumpily for a second, finally relenting with a loud creak and a bash as Aletheia bursts out bleary-eyed and triumphant into the front yard, prancing and spinning, nicotine-stained bathrobe flaring, the manuscript held high above her head. It was ready!

By the fall, dozens of prospective publishers had received copies of her work for consideration. She waited. 1984 came and went. She watched Jeopardy. Big Brother was watching, but everything was kind of fuzzy and 4:3, so he couldn’t see much.

Finally, in 1985 she received one response, the only response she would ever receive, a kindly thank-you-but-no-thank-you.

She was down, of course. But at least she had Folgers in her cup.

Perhaps it was the prejudice or sexism of the publishers, perhaps their myopia, risk aversion maybe. The spelling and grammar mistakes were certainly off-putting. The thesis could’ve been better presented, the arguments better organized. Or could it have been that title..? The Earth: Not Just Flat — It’s Flatter Than a Pancake.

Bottom line: If you wanted to disseminate propaganda and disinformation in 1983, you still needed the deep pockets of a nation state or a big advertising company.

For the average Jane and Joe, the friction between thought and published was simply too great. It was easier to remain unpublished, swapping unbaked affirmations over beers and billiards at the local bar. Most grassroots dumb idea campaigns stayed as local as the originating brain.

But the Internet began to change things. Shiver…

Like knots in a rope, sometimes friction is a good thing.

As Internet technology improved, publishing friction decreased in step. In the beginning, even Internet bulletin boards required access to an expensive computer, a painfully slow and noisy dial-up process, even a modicum of technical skill. By the late ’90s it was easier to host your own site on something like Geocities — but search engines didn’t exactly excel at finding your content. There was even a time when you had to manually submit your site to each search engine. The toil.

WordPress was a major step forward for self-publishing. It still required basic computer literacy, but once you were up and running, there was no limit to how much, or how often you published. And Google came alone to soak everything up, helpfully regurgitating your content for passersby.

Next you could self-publish really tiny works on sites named after body parts, bird noises, and units of measure. Things were looking up! It was the best of times, it was… Well no, it wasn’t that great, was it? We wasted lots of time, and got really shallow.

If Aletheia were alive today, she and her pipe would be super stoked. Self-publishing dumb ideas is met with almost zero friction, thanks to easy-to-use content delivery platforms and, more importantly, the absence of a quality assurance gatekeeper.

Take this article, for example. I am my own editor. I decide what “goes to press”, and when. What assurance do you have that it’s accurate? Did I spell “it’s” right? You only have my word, and my best efforts. I place a high value on the truth and accuracy, but how do you know that? I don’t have a team of editors and fact checkers working for me.

But misinformation, how harmful is it anyway?

The problem with poor quality information is that it leads directly to poor quality decisions and actions. The “Ladder of Inference” attempts to describe the largely unconscious decision-making process of our human brain.

We notice a few things about the ladder of inference:

What if the shape wasn’t a balloon at all? Or what if it belonged to a dating couple on a park bench?

How are you experiencing reality at this instant? What is reality? Where does it come from? What is real? What are you filtering out? What assumptions are you making?

As we approach Q2 of the 21st century, the online world has become our primary world, the Real World, the one where most social interaction happens. A large portion of our Reality and Facts is experienced online. We already live in a crusty version of the Matrix. (We can even quickly acquire skills on YouTube, so it’s not all bad.)

Influencing the actions of another is simple when you control their reality. Imagine you are driving alongside a winding, steep embankment. Your palms are sweaty but your focus is sharp. You deftly navigate each switchback. Now imagine that the windshield in your car is a video screen, and the feed has been slyly swapped to display an innocuous, straight highway. How does that affect your actions?

The one who owns reality, owns everyone.

Your mailing address may be 123 Main St, but your physical address is becoming your IP address. We live in the Internet through our devices, experiencing pre-shaped and pre-filtered information. And we further filter that information by joining online tribes that think the same way we do, telling us what we want to hear.

We’ve seen how the low cost and low friction to publish is often associated with low quality, so some have suggested requiring micropayments in order post and upvote ideas and content. But the implication is that “truth” is distributed by money and popularity rather than the inherent truthfulness of the idea.

In reality, the inherent truthfulness of an idea is completely orthogonal to the number of people that believe it. Two billion believers doesn’t a truth make. Neither does two, or even zero. As an abstract entity, the truth doesn’t care who believes in it. In fact, history bears out that the majority is often wrong. Ask Galileo.

Popular but inaccurate ideas are problematic and tend to persist because they have value. Accepting and promoting popular misinformation can provide us with economic benefits within our community by aligning us with the distributed sources of power and wealth.

What about employing or recruiting distributed truth moderators, something like Stack Overflow for the World? Well that would definitely increase posting friction… Of course, nothing prevents these mods from having minds shaped by persistent disinformation. And we’ve seen this type of system in action before in the form of religious clerics and government censors. Not so great either.

In my opinion, there are no end-all top-down solutions to the information problem, as long as individual players are devious and hostile. The solution is personal, bottom-up, but requires 100% buy-in. Each individual must make a commitment to honesty, humility, integrity, and empathy. When even one individual deviates into the dark and devious realm of disinformation, we end up back in the morass of confusion and mistrust.

So who crowned misinformation? We all did.