PowerShell: An Introduction for Linux Afficionados 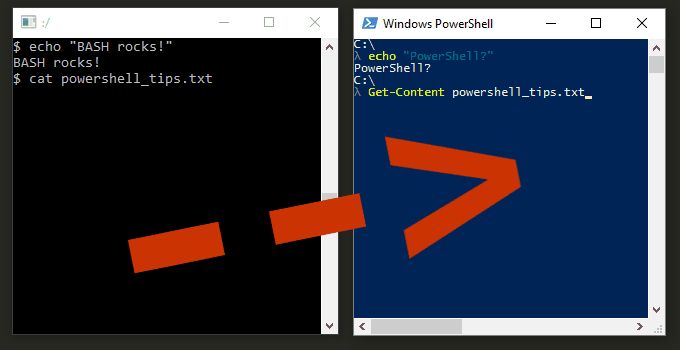 Many of us cut our teeth on the elegant simplicity of the Linux command line, with its dazzling zero-based array of infinitely chainable commands. Then, with a dull thud you found yourself dumped rudely into the Windows environment, where things on the command line weren’t quite so peachy, to put it mildly. In fact, working in the old Windows command line was almost as fun as working in the trash compactor of the Death Star. Fortunately, with the advent of PowerShell, the dystopian landscape of the Windows console started to put forth a few shoots and sprigs of greenery. In this post I hope to show you some of our favorite Linux commands translated to their equivalent PowerShell cmdlets.

PowerShell brings some interesting cards to the table, which differentiate it from the *Nix shellscape.

In Linux, just about everything on the command line is text. A core principle of PowerShell is that just about everything is an object, and an object in the .NET environment to boot. This has some interesting implications. For one thing, it means that you’re not always seeing all of the available information on screen when you run a command in PowerShell. Many times it is possible to access additional properties of the object. I like to think of the default text that is output from a PowerShell command as coming from the .NET object’s ToString() method. Just as ToString() often doesn’t reveal all of the goodies within an object, the default output of a PowerShell command doesn’t always reveal the hidden pearls beneath that texty surface.

Another big difference, which many view as a plus in its favor, is that PowerShell employs a consistent and expressive naming scheme. Once you start getting the hang of it, it can be easy to guess the names of other likely commands. The verbosity is annoying at first, but tab autocomplete and a number of built-in aliases speed things up a lot. Not only are command names more consistent, but the pattern for passing arguments is quite coherent as well. The *Nix’es, being the result of decades of eclectic contributions from the far reaches of the galaxy, aren’t as consistent in their naming and usage conventions. With arcane command names like awk, sed, grep, cat, cron, etc, the *Nix’es are certainly more fun and geeky than PowerShell, but the learning curve is a little steeper.

So if you’re a battle-hardened Linux guru and you’re using Windows, your first inclination may be to just install Gow and then get down to business. But you would be losing out on some of the benefits of PowerShell. First among them: PowerShell was made for Windows; Linux commands were not. :) So I recommend that you make the plunge and learn the equivalent PowerShell cmdlets for our beloved Linux commands.

As you’re learning, you might consider adding aliases for your Linux commands which just output hints to help you recall the equivalent PowerShell command. For example, open your PowerShell profile script (find out where it’s located with PowerShell’s $PROFILE variable) and add something like the following:

Although the eponymous commands exist in PowerShell, avoid using less and more when chaining long running commands because they don’t start displaying anything until the previous command finishes processing everything. Instead, favor Out-Host, shown here.

Note that Get-Process is aliased to both ps and gps so you will still feel at home here.

Well that was easy. Actually ls in PowerShell is an alias for Get-ChildItem.

As discussed earlier, since PS commands generally return objects rather than text, many of those objects’ properties are not printed to the screen when you execute the command. For example, to grab the FullName property of the returned objects:

Remove-Item is heavily aliased. Run the following command to see all of the possibilities. (You may find yourself using rm after all.)

Of course sed is huge, and this little example doesn’t do it justice. But hopefully it gets you started.

Or, the more verbose longhand version:

This is an example in which I find the PowerShell version to be much harder to understand at first if you’re using the shorthand version. And since nobody wants to type ForEach-Object and the like, it’s the shorthand versions of PS cmdlets that you’ll typically find in the wild.

The longhand version demonstrates that the %{ } construct is shorthand for PowerShell’s ForEach-Object{ } function.

The $_ refers to the current object in the pipeline, rather like Perl’s default variable of the same name $_, or the input parameter in a lambda expression (x => x), or even as the this variable in a class.

The two PS examples are identical. The second example is just longhand for the first.

Open an explorer window in the current directory

Display all of the command aliases

View the implementation of a PowerShell function

So there you have it. Hopefully this little Linux->PowerShell translation primer will get you up and running in the world of PS. I’ll try to update this post with more commands in the future. And feel free to post your own Linux->PS goodies in the comments. Remember, don’t wait, automate. =)